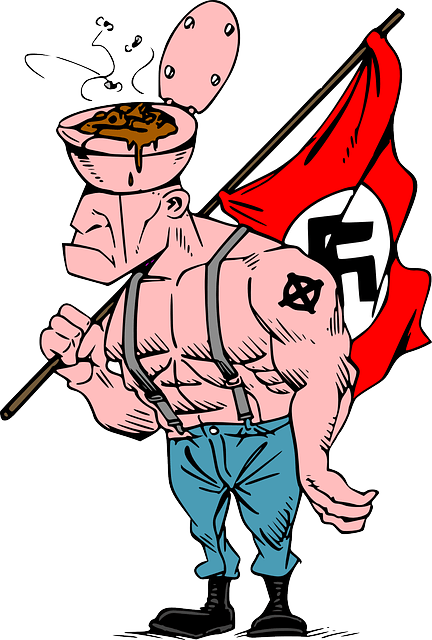 I: Hitler had a single-payer healthcare system.

II: Hitler persecuted innocent, well-meaning wealth creators, made them produce his bombs. Socialist welfare advocates want to do the same!

III: Hitler used the decadent liberal media to prop up and promote his evil agenda of Big Medicine and mass murder.

IV: Hitler was a ‘National Socialist.’ The enemies of Our Glorious Nation are ‘Isolationist Socialists.’ See the connection?

V. Just like every damn Democrat who has ever had the grave misfortune of tragically encumbering the earth, and entirely unlike every single Republican in history, Hitler was the sworn foe of all political transparency and accountability.

Yes, Hitler’s left-liberal-fascist, progressive-Maoist, Marxist-Islamic-Atheist-Unitarian-Polytheistically-Pagan-Anarchist-Authoritarian-Sovietizing ‘Death Panels’ were hidden from the world until it was all too late!

VI. The violently charismatic and disrespectfully flamboyant LGBT mafia are relentlessly and viciously opposed to freedom of speech, and believe in strident ranting, roaring, screaming, and shouting down their enemies.

These strategies are 100% identical to those used by Hitler and the Nazis. In every possible way!

Well, insofar as there’s a difference!

VIII. Hitler believed the Weimar Constitution was ‘a living document’ that was latter corrupted by pinko apologists for so-called ‘democracy,’ i.e. the immoral and arrogant mob rule of anti-constitutionalist anarchy. That’s why he shredded it and dealt the abject corpse of German Constitutional Republicanism a humiliating sea burial in the Seine!

(Wait, I think that is definitely a German river, right?)

IX. Hitler persecuted artists who disagree with him. And guess what? In entirely like manner, conservative actors, musicians, film directors and perfectly heterosexual massage parlor professionals are being eternally hounded and persecuted into starvation by the reprobate, decadent cultural gatekeepers of the age!

Well, I mean, it’s the only possible explanation, right? I mean, otherwise, how could Hollywood possibly be SO DAMN GAY???

X. Hitler threatened the peace, the safety, and the security of other nations. In like manner, the freakin’ liberals and pacifist isolationist pinkos want us to throw those British guys from that England country over there under the bus, and sacrifice them to the swarming hordes of evil Arab illegals who are currently rampaging and pillaging their way through Birmingham!

Or, whatever that stupid Euroweenie village in pre-new-London is supposed to be called.

Oh, and last but not least:

XI. Anyone who disagrees with me is literally worse than Hitler!

Well, because by appealing to Godwin’s Law, they have already, by definition, lost the entire argument!!!