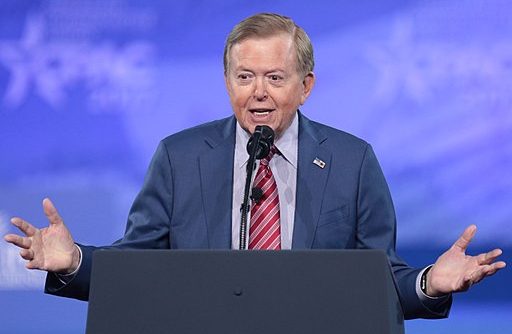 New York (Fox News). One day after delivering the most absurd, sycophantic, car crash adulation of President Trump (Moran, 2020), Fox Business host Lou Dobbs was found in Central Park bound and naked. An alert female jogger hearing muffled moans emanating from a copse of Rhododendrons, investigated and discovered Mr. Dobbs trussed and gagged with duct tape in nothing but his “birthday” suit. The jogger (whose name is being withheld by police) managed to call 911 and was treated for shock (along with Dobbs) when the police and emergency services arrived.

We are all grateful that one of New York’s finest minds and news presenters was not seriously harmed by the evil individuals who perpetrated this heinous act. Apparently, while walking his dogs last Friday morning at his 300 acre, Sussex, NJ estate he was accosted, chloroformed and then trundled into a purple vehicle that was described by several witnesses as “aerodynamically weird looking.” A sketch artist, working with the witnesses, created what appears to be a close depiction of said vehicle for which an APB has been issued. The question still remains as to who impersonated Mr. Dobbs on his Friday evening show. It seems that the “faux” Lou’s demeanour on set was so good that colleagues, guests and staff had no idea he was an imposter. Anyone having information on this deviant, scurrilous act should immediately call 1-800-POO-RLOU.

Follow up questions established that three assailants were involved in the abduction. It was also revealed that the last thing Dobbs remembered was someone covering his face with a rag and his dogs howling. Apparently, the dogs have gone missing and the FBI has been called in because it has now become a double kidnapping case. There has been speculation that the notorious American skinhead group, The Mr. Magoo Volksfront, could be responsible. Rumours are circulating that the founding member and current Club president Adolph Nielson (twin of his deceased brother Leslie), a known impersonator, has been targeted as a person of interest and is being sought for questioning.
.
Meanwhile, the reactions of media professionals to this incident have ranged from outrage to incredulous adulation:

I can’t believe this happened! It should be a lesson to all of us to be aware of our surroundings, alter our routines, be cautious when walking or driving at night and obtain a license to carry firearms. This could befall anyone of us! WTF!

What a lucky ‘b—–rd’! His ratings are now going to go right through the roof!

It is not that I am unsympathetic, but the image of Lou Dobbs stark naked makes me want to puke!

Don’t pay any attention to Laura Lou, that same image really turns me on!

No I categorically deny that I arranged for this to happen to boost the network’s ratings.

(ED: Worth mentioning here that when our intrepid gonzo Glossy News team interjected: ‘But nobody has actually accused you of this? … YET!’ Murdoch replied, “I’ll get to you boys later. Keep your trap shut, the free press is watching you!”)

Hey Lou! I love you to bits and feel bad for you but do me a favour though… could you act more like the impostor in your future broadcasts!

Hey I’m with Rachel! I wish somebody would kidnap Mika and then we could really spin things out!

You know I wasn’t fooled for a second. I knew it was Adolph right away because I have actually had him impersonate me in the past! My Life Store Product sales get really pumped when he goes on instead of me!

Hey Lou I hope you find your dogs. Poor things!

…I didn’t regurgitate out of fear, but my reaction was prompted—no offense Lou–by the repulsiveness of his naked body! And believe me I know nakedness!

Ms. Vanderbilt’s agent, previously alleged to have been involved in the notorious lapdancers 4 senators scam,  said he would be sending a selection of videos, flowers and chocolates to the news host for providing his client such a tremendous publicity opportunity.

The police continue to search for the culprits and have released a composite rendition of the perpetrator’s getaway vehicle. As of press time, sources indicated nothing has been forthcoming. Again, the number to report any suspicious activity to the police is 1-800-POO-RLOU.