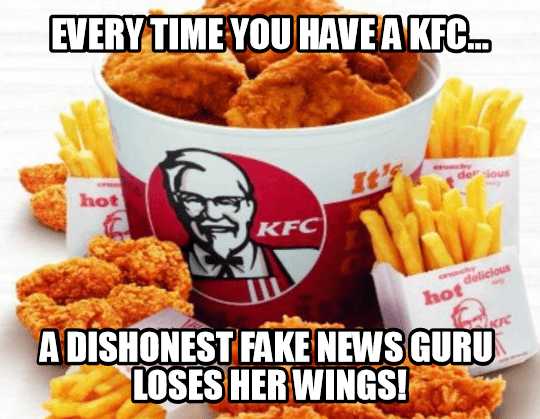 The three officials in question, representing KFC, McDonalds and Massachusetts Meth Burger, have pointed out that the plague of fake news doesn’t only extend to unjust and ungrounded character attacks against the best President ever, but also represents a ton of malicious bad faith attacks against the various kinds of nutritious food we have all come to know and love so well.

Donald Trump’s lobbyists are well known for their intriguing personalities, confusing positive psychological traits like self-confidence and healthy self-regard with unbridled arrogance; wonder where they got that from???

Choice cuts include the following:

Have you noticed nobody was even TALKING about the supposed ‘bad health effects’ of McDonalds until the mainstream liberal media started moralizing about it? Well, isn’t that convenient… It’s almost as though these imaginary ‘health risks’ were all just standard issue made-up FAKE NEWS nonsense that the MSM have deliberately concocted in order to make Donald Trump and his close associates look bad! I mean, it would be the first time, would it!

Apparently, 50.000001% of Americans think eating five KFCs a day is likely to pose long-term health risks. Yeah, like we haven’t seen these massaged polls before! Fake polls, like fake news, are purely a way of manufacturing consent, as the great nationalist, conservative and populist thought leader, Noam Chomsky, tells us.

Honestly, this is all just such crap! Are these the same ‘experts’ that told us evolution is for real, the earth is billions of years old, and climate change is actually happening? Sounds to me like we’ve had enough of experts, as a fellow sound American patriot of ours, Michael Gove, has said. I think we need a lot less mainstream science and a lot more common sense!

‘Junk food’ is a disingenuous, biased framing strategy invented by George Lakoff, George Soros and Anderson Cooper, in order to make good things look bad, and bad things look good. “Evil be thou my good,” as the original King James Bible 1611 says. It’s exactly like all those times when they decided to deliberately misrepresent wealth creators as crony capitalists, felicitous holiday weather as ‘global warming,’ conversion therapy as ‘child abuse,’ and ‘a bunch of elitist, out of touch metropolitan intellectuals sitting round a table moralising about what’s true and what isn’t’ as ‘peer review!’

MSNBC, for their part, are planning to respond with a special episode on Madonna’s magic water and some hippy herbal cancer cures.