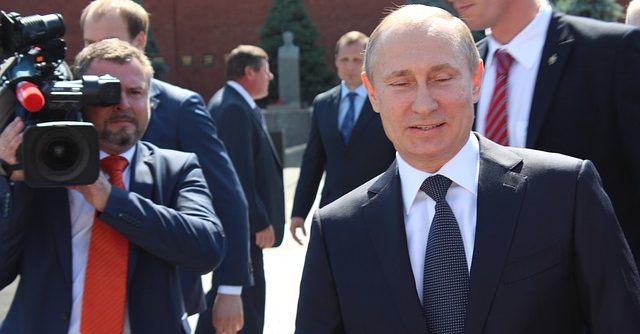 Our ever vigilant super spy drone has done it again! It managed to record the so called ‘historic’ meeting between big-wigs Vladimir ‘the Impaler’ Putin and Kim ‘Moe haircut’ Jong Un. And it did it without the former KGB agent or the Pillsbury Doughboy noticing it!

Here is what it picked up:

Putin: So Un, how was the train ride?

Un: Long, but well stocked with scotch and two Natashas wearing blond wigs, so it was bearable.

Putin: Why don’t you just fly?

Un: Too easy to get shot down.

Putin: No one is going to shoot you down!

Putin: Are you getting by the American sanctions OK?

Un: Yes, but it does slow up the deliveries of Champagne and foie gras. That really ticks me off!

Putin: Same here. I have been waiting weeks to get my new plasma theater size screen so I can really take in Game of Thrones. And how are the peasants doing?

Putin: So you have set up another meeting with the Chump I see.

Un: Ah, Trump? Yes, I might as well. Got to keep the circus going so that people remember to respect us even though we are one of the poorest and most backwards countries in the world. But as long as I can get the hound dog to come knocking at my door I will get the press that I need. And the prestige!

Putin: He is such a turkey! If you work at it you will be able to wrap him around your finger like a Chinese finger trap. Just stroke his ego with one hand and pick his pocket with the other.

Un: I will remember that. I just have to be a little more wily this time. He did take me by surprise with that walking out business at our last meeting in Vietnam.

Putin: You weren’t expecting that? That is one of his favorite tricks! Haven’t you read any of his books?

Un: We don’t have foreign books in North Korea. Only ones written by my Glorious Grandfather, my Glorious Father and by me. Who would want more?

Putin: You might want to get a couple translated copies just to see what sort of a man you are dealing with.

Un: They would be so full of hot air I would be afraid they would explode during delivery. Besides that, I can tell by looking at him that he has ‘Sucker’ written all over himself.

Putin: He is a lot of fun actually. He is so full of himself that he couldn’t distinguish BS if you stuffed it in his nose.

Un: I did pull a fast one on him in Vietnam actually. I ordered a special dish for him telling him it was Mandarin Duck when actually it was gopher intestines (They both laugh uproariously). And the consort I got him was actually a guy who who had gotten a cheap Hong Kong sex change (They laugh again).

Putin: Check this out- I got him to believe that I am a ‘good guy’ despite having killed two dissidents in England and one in the US, having violently taken over Crimea and taken their naval ships hostage, had numerous Russian journalists who condemned me killed, and shot down a Dutch airliner with civilians aboard, then not letting the families recover the bodies until a week later. And STILL this guy thinks I am his best buddy (Their laughter hits a new height of hilarity).

Un: (Brushing tears out of his eyes). Oh my! That is too funny! Just for kicks at our next meeting I am going to stick a whoopee cushion under his seat and see how he handles that! (They laugh). Then I’ll have a ‘pretty boy’ come up and give him a lap dance and have photographers ready to pounce out and take pictures. We’ll see how that goes down in the American tabloids. (Their laughter escalates).

Putin: (Now it is him wiping the tears out of his eyes) Oh, man! You are too much! I would love to be there to see THAT!

Un: How did that guy EVER become President?

Putin: It sure wasn’t the same way WE did!

Un: That is for sure!

Putin: OK, we have to get down to serious business for a while now.

They talk for hours over national and international matters of mutual importance, including who has found the best distributor for Italian wine.

Un: Well, time to go, bro. (They bump fists) .And remember to always stay on the Dark Side of the Force, it is more fun and profitable!

Putin: You got that, homey! This has been fun. We’ll have to meet here again some time soon.

Un: It has been a pleasure. As far as coming up here again on the train I’m not so sure. I don’t know if my hemorrhoids could handle it. Maybe as soon as we can come up with a missile proof plane.

1 thought on “SCOOP! We Get A Recording Of Putin And Jong Un’s Hot Date In Vladivostok.”