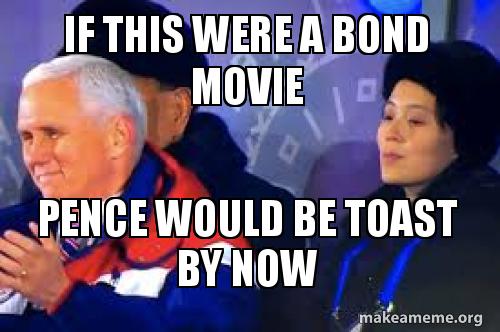 The plan to overlook political differences and cash in on the once in a millennium chance to be in the Olympics caused Kim Jong Un to forgo his nuclear rants with his Anglo doppelganger in the U.S. conquistador seat of power. Here was the chance to control events in America in a way the Russians could not even dream of.

His sister was to sit directly behind the Vice President of the United States at the Olympic Opening ceremony.

This was an opportunity made in Heaven – or, in Jong Un’s case, a chance made in Hell. He now had the chance to bring down the US from within.

He himself would not go to the Olympics. There was too great a risk of assassination. The media attention would be too much as well. He could handle the overly staged photo shoots he managed from within his hermit kingdom; but in the South, there were those technologically advanced cameras that for all he knew might have the ability to photograph him naked through his clothes. The thought of nude photos of himself dropped as propaganda from enemy planes high over head made him shudder.

He would have his sister go. The bitch needed to start earning her keep and not be prancing around Paris spending more money in a day than the average peasant in North Korea could afford in their whole lives. She would do the dirty work.

From her position behind Pence she would firstly blow a micro-dart through a straw into his neck, that would render him unable to notice the violations of his space he would soon be experiencing. Then she would pour a biological dust down the collar of his jacket that over time would invade his body and shut down the creative and higher functions of his brain, leaving him with the mental abilities he had, basically; but unable to think creatively. She would then sneak microchips into the submarine sandwich that he brought with him because he was afraid of eating Korean food. These would eventually lodge in his brain. These chips would feed messages to him unconsciously via microphones, run by North Korean agents stationed in Washington D.C. These agents would broadcast information to his weakened brain, directing him to do their bidding.

Jong Un rubbed his hands in joy. He now had his own Manchurian Candidate in the White House itself, ready to execute his will. The first thing to do – have Pence suggest giving aid to them in money, food and military equipment. Second – sever US ties with South Korea. Third – have those two obnoxious actors who made fun of him in the movie The Interview publicly executed.

Unfortunately for them, the plot did not work. Pence’s higher mental facilities were already shut down from years of hyper-conservative upbringing and whatever little he had leftover were soon annihilated from serving on the Trump administration. Also, being used to putting up with annoying reporters and protesters, Pence had an inner instinctual mechanism for shutting out the messages from the Korean agents. The whole venture was a wasted effort.

Except for the drug in the micro-dart. It had a longer lasting effect that no one expected. For days thereafter Pence had a smile on his face, hugged gay athletes, was actually nice to people and lost the fossilized frozen look on his face. At least for a while….