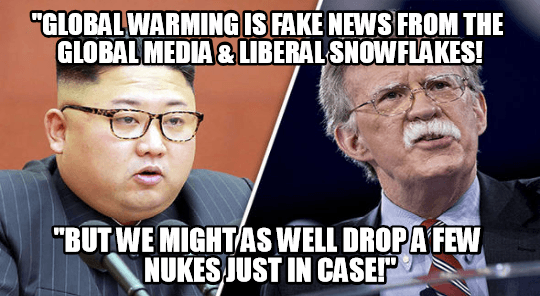 Although widely condemned as an existential threat to human life, John ‘Armchair’ Johnny Bolton, a true upper-class boy come good, has actually turned up as a MOST unlikely saviour of our dying planet.

Well, the Man of the Hour has finally come up with a stunning master plan to end the single biggest existential crisis we are facing…

THE DEATH OF ALL HUMAN LIFE ON OUR PLANET.

Running contrary to commonly held perceptions of ‘anti-intellectualism’ in the Trump administration, Bolton is on solid scientific ground, when it comes to climate change. Even quite a number of towering intellectual heavyweight climate change consultants and Big Oil lobbyists on Fox News, with diplomas in a wide range of relevant scientific disciplines such as chemistry, nuclear physics and evangelical creation science, have said that Bolton’s plan to end climate change forever is a real game changer!

Now let’s just be hard-headed about this, and let’s make sure none of those heavily closeted Communist sympathizers like Rod Dreher or Pat Buchanan get their chance to continue their holy war against the New American Millennium.

Now we all know about all these ridiculous, feeble-minded liberals and snowflakes and other pacifist bullshit closet Marxists like David Cameron and David Turnbull, whose commitment to the TRUE moral values that made America great extended no further than bombing a bunch of pathetic sand niggers in Libya while leaving the entire continent of Africa, and most of the Middle East, to continue conspiring against our tremendous country and indeed to further perpetuate the liberal climate crisis…

And none of us can deny or doubt that the absolutely unhinged, stark-staring-maniacal pacifist lunacy of all these radical far-left anti-nuclear extremists has led us to the point where human life is already approaching its final hour!

However, Real Science tells us that the last hope of Humanity is to bring about another nuclear war.

All this pedantic fault-finding and quibbling over Iraq… What the hell was that all about?

I mean, we had a few minor hiccups, but that’s because I basically told that pathetic liberal snowflake George W. Bush to turn their entire ‘country’ into ashes and then we could sell them as fertilizer to some of these pathetic ‘allies’ of ours who are too dumb enough to know we’re taking them for a ride.

Basically, all this crap about ‘renewable energy’ was invented by George Soros and the liberal media as some kind of sinister, conspiratorial psy-op, in order to deliberately destroy our magnificent coal industry, which has done so much to make the world safe for democracy. I mean, it’s just really too ABSOLUTELY RIDICULOUS FOR WORDS to think that in order to save human life on earth, we might have to make some sacrifices at home!!!!

I mean, that is just a COMPLETE AFFRONT to basic logic, and anyone who thinks that America should have to lose one single penny of our own GDP in order to save a bunch of primitive savages over in Kenya or Papua New Guinea who don’t even know how to wipe their own asses is just to fundamentally, fundamentally IMMORAL, I don’t even have words to describe it!!!

So how do we square the circle of the national interest and the survival of the human race, including all the worthless gooks, Africans and Muzzzlim fanatics who quite frankly, I’m barely even able to name without vomiting? Well, let’s keep doing what we’ve been doing all this time, fracking, mining, burning, and in order to counterbalance any SUPPOSED ill effects of the carbon industry that the liberal media and all these treasonous, braindead Marxist extremists like Roger Scruton and Michael Gove, are postulating…

Well, we can just drop ten billion tons of enriched uranium on whoever we goddamn please! We need a final solution to the problem of climate change, but while we’re at it, we might as well kill a few billion birds with one stone while we’re at it! So, we can begin with… Hey, can you pass me my list… WHAT THE FUCK?!!!!

WHERE… THE FUCK… ARE ALL MY COUNTRIES?!

The aide begins to tremble.

Last thing we heard, John Bolton has a bit of an itchy trigger finger…

No idea where we got that one from!

Still, if he finally managed to put it into action at that press conference, you’ll be the first to hear about it!