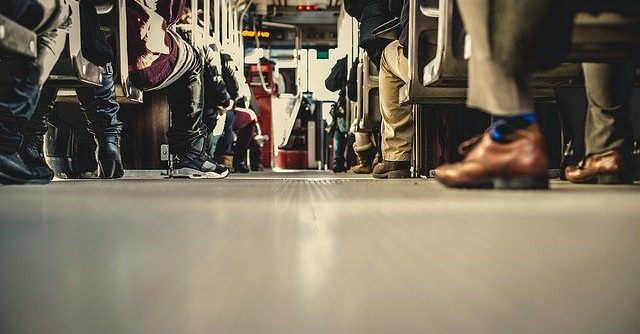 A Satire on a Bus Ride in Karachi

A BUS RIDE: My funny experience!

Just to get a taste of the good old days, I got an urge to ride a bus when I recently visited my homeland.

I boarded a bus just as it began to move. I clutched a supporting bar at the entrance and was then pushed in forcefully by an unseen hand. My arm received a terrible jerk, which I was sure had dislocated my shoulder, but no, it was okay. Since no seat was available, I had to stand along with a multitude of others. It was hot and humid. My eyes fell on something painted on a panel near a seat:

As you sow, so shall you reap.

God! I reflected and tried to remember my deeds in the past. I was sure I didn’t do anything so bad, so why this torture?

I kept standing quietly and had to bow down. In these buses one must remain bowed down while standing, because the roofs are very low. Perhaps these buses were originally made for passengers of a shorter stature. Then my attention was drawn to a muscular, naked arm holding a rod above for support, just ahead of me. The dark arm was shining with perspiration and a layer of dirt. I made it a point to avoid direct contact with it at any cost, and this had really just become my immediate absolute purpose in life! I managed to keep off this arm, despite the pressure of passengers from behind to move ahead.

The conductor sneaked up to me from the side and demanded the fare. I gave him some coins and asked for a ticket. He just laughed and showed his brown, stained teeth. The passenger with the shiny arm informed me that it was not customary to issue tickets in these buses, and while informing me of this important point, he made a gesture of moving back a few paces, making me shake like a leaf on a windy day…

Bowed, shoulders aching, and hot engine fumes going down my lungs, I waited patiently for the next stop, in order to get off. Finding some room in front, I slipped ahead, carefully avoiding the shining arm. A seat on the right got vacant. A fellow passenger and I rushed to get hold of it. He got in first, but as soon as he sat, we all heard a painful yell!

It turned out that a nail on the seat had got dislodged and hit him on the rear. He got up and began swearing. The driver stopped the bus, took out a hammer from the glove compartment, forced his way towards the seat and fixed the nail. The conductor, meanwhile, had somehow managed to pacify the passenger by not charging him any fare. I considered myself lucky not to have occupied that seat and wondered whether, if this scenario had taken place in America, the man would have sued the bus company for a million dollars!

A lady then requested the bus driver to stop immediately as she had to get down. The driver, an obliging fellow, stopped; although it wasn’t a bus stop. The seat got vacant, and a rough-looking fellow near me rushed to get the seat. I was brushed away, almost losing my balance; and it was then that it happened! I got a direct, unhindered impact of the shiny arm right in the face giving me a taste of salt, and then it traveled down my white shirtfront, leaving a conspicuous impression on it. I closed my eyes in deep despair and heaved a sigh. The bus then stopped near Empress Market and I got down, aching, disheveled and very much low in spirit.

The multi-painted bus then moved off, but not before I read another slogan on it:

Bye friend. May God protect you. Will meet again.

I hailed a taxi to go back home – in one piece.

ED: WELCOME BACK RAFIQ! AND MARK TOO!

Rafiq Ebrahim A Brief Bio Rafiq Ebrahim is a freelance writer and novelist. His short stories and articles are frequently published in Pakistani, Indian and US magazines. He has written three novels: Glowing Embers – a 1967 love story (Published in Pakistan in 1967). Advertising – The Other Side – brings to light a darker side of the glamorous profession (Published in 1984 in Pakistan). Beyond the Crumbling Heights published in USA in 2009 and is available at amazon.com and other online book stores. Education: Bachelor of Science from the University of Karachi. Majors: English Literature, Chemistry and Microbiology. Work Experience: Over fifteen years with leading advertising agencies in Pakistan as a copywriter and Client Service Executive. Some Cherished Publications: 1, Strangers on a Train – New York Times Magazine, 3rd March 2017. www nytimes.com/column/lives. 2. Wisdom of a Bum – Foliate Literary magazine, Feb 2017. 3. Crib – E-Fiction, India – 7th March 2017. 4. Stem Cells Treatment – published in The Fountain Magazine in its issue of Nov/Dec 2017. www.fountainmagazine.com. rafiq.ebrahim#gmail.com