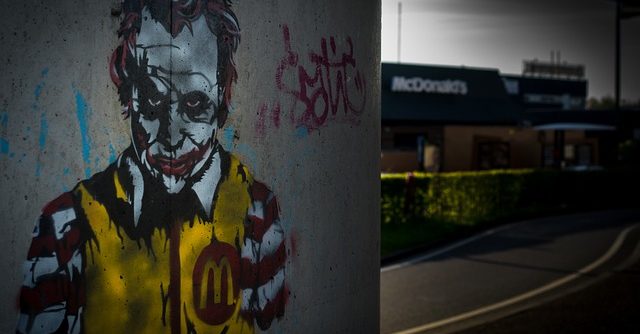 Behind you stands a symbol of oppression. The House of Commons, where millions of citizens have languished under the name of this woman: Theresa May: who has been held up to you as the shining example of patriotism!
You have been supplied with a false idol to stop you tearing down this CORRUPT PARLIAMENT! Let me tell you the truth about Brexit from the words of Theresa May.
“The Brexit Party didn’t murder British politics. They saved our country, then took the blame for the appalling corruption of our political establishment so that I, to my shame, could build a lie around this fallen idol… The Conservative Party. I praised the madmen who tried to murder my own country. But I can no longer live with my lie. It is time to trust the people of Britain with the truth… And it is time for me to resign!”
And do you accept this woman’s resignation? And do you accept the resignation of all of these liars?! Of the CORRUPT?!

Ehw bladdy hell, chaps, an entire bally country locked up in a hostile foreign bureaucracy for decades, based on a lie? Well baggah me sideways, darling!

Britain needed a hero. Or a heroine. Or even some high grade heroin, or coke.

Well, we need it now more than ever! You betrayed everything we stood for… Er, Boris, what do we stand for again? Bugger me if I can remember. (Bugger me? Er well, not in a Dave Cameron way, of course!) And what’s a hero again?

There’s a point far out there, when all this juvenile political rhetoric fails you. When shallow talking points aren’t weapons anymore, they’re shackles, letting the bad guys get ahead… One day, you may face such a moment of crisis, and in that moment, I hope you have some good friends in Whitehall and Brussels like I did! To plunge their hands into the filth, so that you can keep yours clean!!!

Well, at least they’re not dripping with the filthy Tory coke I just snorted off some rotten, diseased, decrepit, dead pig’s arse!

We take Britain from the corrupt, the rich, the oppressors of generations who have kept you down with myths of opportunity (no not you Arron! Thinking more the BBC and Fake News Guardian!) and we give it back to you – the people. Britain is yours. None shall interfere, do as you please. But start by storming the electoral stations and freeing the oppressed! Step forward, those who would serve the Brexit Party and Farage! For an army of true patriots will be raised. The powerful will be ripped from their decadent Islington mansions and south of the M1 Waitrose deli counters, and cast out into the cold world of poverty and penury and starvation… that I and all of you know so well, and we endure. (Oh do excuse me, my pretties… Yes that’s right darling, another couple of Cayman yachts pronto, luvvie. Terribly sorry luvvie, can’t use my handset now, I’m ranting! Catch you later, sweetheart. Toodlepip!) Why yes… well, anyway! Meddling foreign courts will be abolished! Spoilt bananas will be consumed, bent to buggery sideways or not! Blood will be shed, albeit without a single shot being fired! (Er… PSST?! I say there, spinnies… now I DO think that’s how they told us to say it, isn’t it?) Well, never mind. The POLICE will SURVIVE, as they learn to serve TRUE PATRIOTIC LEADERS. This great city… it will endure. Britain will survive!