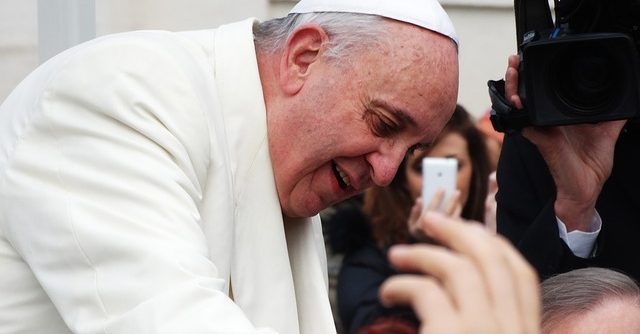 I know the Pope’s comments are from a while back; but don’t forget that much of the media are still giving a simplified, sanitized picture of Pope Francis for general consumption!

This being so, it’s definitely worth taking a long, hard, critical look at the most fashionable, genial, and photogenic clerical superstar since His Most Hot-Ass Holy-Buffness the Dalai Lama.

But, come on! Jesus said ‘those who live by the sword will die by the sword?’ Does this mean Jesus was more like the pacifists of today? Or was he more of a ‘non-aggression principle kind of guy?’ Or is that all a little bit speculative anyway?

I can’t say for sure, but I would like to think he didn’t consider committing violence against people who ‘provoke you’ as ‘normal’ behaviour.

Note the lightness of tone with which the ‘Holy’ Father condones the Paris massacres and ‘normalizes’ (sic!) the murder of the heroic dissidents of Charlie Hebdo.

But as Polly Toynbee says, the Pope is using the ‘wife-beater’s defence.’

Sure, you don’t have to agree with what Toynbee has written about disabled people, or any other topic. But it’s not hard to see that she’s 100% correct about this one. ‘The bitch provoked me!’ is never an excuse for harming innocent people.

And I wish Pope Francis would have the humility to acknowledge this.

I also wish the Islamists (and theocrats of all stripes) would cease to acknowledge it. Then they would cease to exist any longer, and instead, would become truly human.

Moreover, I wish the Regressive Left would finally humble themselves and leave the personal Hell they have created for themselves.

I cannot prophesy what will happen in future. But in recent history, Pope Francis has manifested a strong resemblance to a wife-beater, both because he uses the kinds of excuses for violence a wife-beater would, and because he arrogantly behaves as though everyone is provoking him, when he has only been so good, so kind, so benevolent and loving towards everyone.

How dare anyone question this charitable God-among-men?

So, Pope Francis is a semi-non-apologist for the massacres and Paris. But unlike some of his predecessors, he is no longer able to torture and kill people who satirize religion. (Or at least the ‘right’ religion). I wonder how much sleep he has lost over this? 😉

Hm. Well, say what you like, Pope Francis is certainly a little ‘shrewd’ and ‘wily.’ 😛

Make of that what you will.

But then again, who am I to judge? Again, as quoted here:

There are so many people who speak badly about religions or other religions, who make fun of them, who make a game out of the religions of others,” he said. “They are provocateurs. And what happens to them is what would happen to Dr. Gasparri if he says a curse word against my mother. There is a limit.

Oh, and that (believe it or not!) the medieval Church and Jesuitically-Jesuit Counter-Reformationists used against heretics. Need I go on?

Presumably, because there’s no nation on Earth that would permit you to burn your ‘enemies.’

Pope Francis should repent of his bigotry, hatred and intolerance.

What would Jesus do?

Jesus bowed his head before scoffers and showed humility.

The Holy Father, on the other hand, chose the opposite path.

Pope Francis needs to pray. He needs some forgiveness!

***
Loosely based on a piece originally published on Wallace Runnymede.