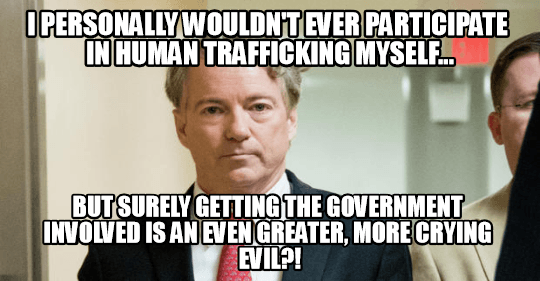 Washington, DC- On Monday, Senate Judiciary Committee Chairman Chuck Grassley (R-IA) challenged Senate Majority Leader Mitch McConnell (R-KY) to a duel for leadership of the Senate, after the Majority leader declined to hold a vote on bipartisan legislation aimed at criminal justice reforms. McConnell responded to Grassley’s challenge by offering one of his own, a game of Russian roulette for control of the Senate.
On Tuesday, Senator Rand Paul (R-KY) threw his hat into the ring, telling reporters, “Mitch McConnell has been a stain on this legislative body for far too long. As the leader of the Senate, he is arguably the most powerful elected official in this country, outside of the President. During his tenure we have seen nothing but logjam, procedural failure, and a serious departure from the bipartisanship and compromise that has been the staple of functional government for the last 20 years. Once again,he has failed the American people, and he has brought shame to the people of the great State of Kentucky.”
“If Leader McConnell is willing to go head to head with Senator Grassley for the top spot in the Senate, then I think that offer should be open to all challengers. I want in. Chuck Grassley is hardly the man we need leading the Senate at this juncture in time. He is woefully out of touch with Americans; I mean he challenged McConnell to a duel for Pete’s sake. He’s a fucking dinosaur, and he belongs in a museum with those two flintlock pistols he was waving around yesterday. He should not be in charge either.”
“If Leader McConnell wants to play a game of Russian roulette for the Senate, then I want a seat at that table. Hell, I’ll even bring the bullet. We both know that Chuck Grassley will not call your bluff, but I will.  I just have one question for you Mitch… Do you feel lucky punk? Do you?”
Senator McConnell replied moments later via Twitter:
“Senator Paul, you got your ass kicked by a sixty year old man last year. You ran and hid behind Steve Scalise(R-LA) as he took a bullet upholding the virtues you claim to defend. Your father was a great man who served his country with honor and dignity, you are not. You are a pampered, petulant, little brat, and you never learned that children are supposed to shut the fuck up when the adults in the room are talking. My office door is always open Rand, and I will extend my offer to you as well. Come on by whenever you’d like,and I’ll be happy to Mitch slap your aspirations back down to the dirt… because that is where you belong. You know where to find me Rand, but don’t forget, I know where to find you too. I’ll be waiting.”
Spokesman for all three Senators refused to comment for this story. At the time of publication, Senator McConnell was spotted sitting in his office, twirling a Colt .45 and sipping a glass of Pappy Van Winkles Family Reserve and laughing maniacally. Senator Grassley has not been seen since he issued his initial challenge on Monday. Senator Paul was last spotted in the Congressional men’s bathroom changing his undershorts. This story is ongoing.