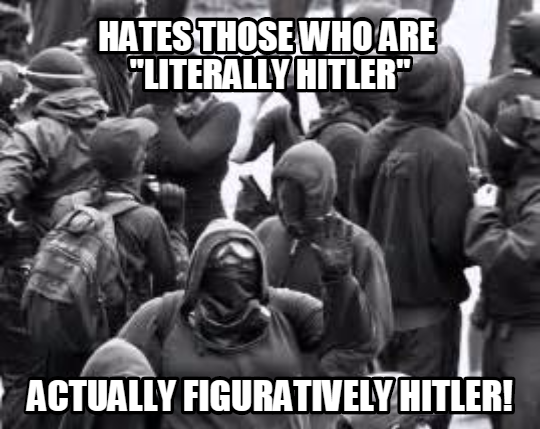 The Hamburg G20 has been met with the usual riots and hooliganistic behavior from sexually-frustrated undergraduates and straight white upper-class Black Bloc pseudo-intellectuals.

However, the recent reclaiming of the city by 15 000 police officers has led to serious criticisms.

One protestor told us:

I wouldn’t have expected anything better from the bourgeois, capitalistic neoliberal state.

Fuhrer Merkel has been so ruthless with us, that it reminds me of Hitler’s SS, back in the 1930s.

Remember the Nuremberg rallies, when all these moronic, brainwashed idiots with more bullshit ideology than good sense were baying for blood and screaming for the final completion of their evil, achingly-privileged bourgeois revolution?

Remember how the SS used to go around punching people, purely because people had an honest political and philosophical disagreement with them?

Just like the Nazis, the fascist neoliberal bourgeois capitalist German state of today are not interested in hearing opinions they don’t agree with.

We’ve been so patient and self-indulgent with them, and they only get more bold, audacious and even outright brutal.

It really says something when you can get hordes of brainwashed idiots rampaging through a city, spreading utter carnage and perpetrating the most senselessly brutal acts of violence, and then they have the cheek to blame the real victims?

I swear, I cannot for the life of me understand why someone would do that! Never… not in a million years!