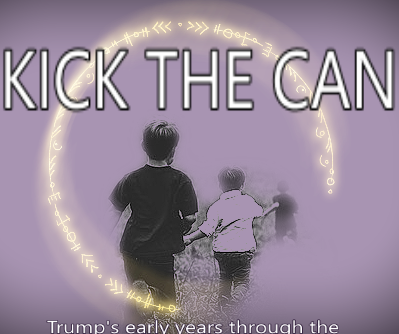 Ever wonder what Trump was like as a child? Much like Jesus, his early years are a mystery. In a new book penned by one of Trump’s close childhood friends, we now have a window into the mind of the elementary Donald. The takeaway from the book is simple. Trump was the kid who no one really wanted to play with. SAD.

In his book, Benedict “Bennie” Abrams, a native New Yorker, gives a rare look into being one of Trump’s few childhood friends. Throughout the book, Abrams recants how Trump interacted with other children on and off the playground.

In the introduction, Benny writes, “Donald was smart but not in the ordinary sense. He knew all our weaknesses and he was good at playing on them. This is how he won many games. However, it is also important to note that when he did lose, he did so in spectacular fashion.”

Benny claims many of Trump’s friends didn’t hang around long, usually opting to play with more normal kids. “Donald, or ‘Skippy,’ as he was dubbed early on, just didn’t know how to be a kid,” says Benny.

In Benny’s book titled “Kick the Can,” he gives an incredibly bizarre look into the way Skippy interacted with other school children and the few friends he did have. Chapter III, entitled “Playtime with Skippy,” gives an informative look into those interactions.

When it came to playing physical games on the playground at school, Skippy was one of those kids who never got picked first to be on anyone’s team. He quickly learned, however, that if he threw money at some kids, they would take Skippy on their team and suffer the loss. The thing he really excelled at was cheating. We all were impressed with the way Skippy stole bases in softball. A few other playground games that set Skippy apart from the other kids were:

Red Rover. Skippy had a queer way of playing Red Rover. First of all, he never just said a friend’s name. Instead, he used the Russian version of as many names as he could, and would call them comrades. For instance, when he was the captain, which was all the time because he was loaded, Skippy would yell “Red Rover, Red Rover send Comrade Mikhail (Michael) right over. Once our friends were caught, instead of allowing them to complete the chain, he would hold them hostage. We never really thought about it much…until now.

Dodge Ball. Trump excelled at Dodge ball. That’s about all I can say, except maybe that when it was his turn with the ball, he always threw like a girl. I remember that detail because we all made sure he got the ball instead of another playmate named Richard. Richard was sadistic, no doubt about it. Anyone hit with the ball thrown by Richard would return to class with a bruise someplace on their body. We soon took to calling Richard by his nickname, Dick. Dick and Skippy were good friends.

As everyone knows, spelling isn’t Trump’s strong suit. Not much has changed between the early days and the present, as is evident by numerous misspellings in his daily tweets. Nor was he a genius when it came to strategic games.

Hangman. Skippy would make up his own words using the lesser used alphabetic letters such as Q, X, and Z, so that anyone playing against him would always lose. The smile he made when he was drawing the hangman’s noose was downright creepy.

Tic-Tac-Toe. Donald never understood why he couldn’t use “I’s” instead of “O’s.” Most kids gave up instead of trying to explain the concept of this most simplistic game to him. The first time I suggested playing Tic-Tac-Toe, without warning, he began to take off his shoes and socks. Later, he confided in me that he thought we had to play with our toes exposed. It is funny now but this was an early indicator of Skippy’s inability to listen and learn.

Skippy never really got the hang of board games. There was never a time, to my recollection, that he won anything.

Monopoly. You would think Skippy would be a whiz at Monopoly due to his father, Fred, being a real estate mogul from Queens. Unfortunately, it was not to be. He was always in Jail or owing Luxury Tax. What little money he earned making it around Go and NOT losing $200, he used to buy the least expensive properties like Baltic and Mediterranean Avenues. Occasionally he splurged and bought Kentucky Avenue. He got extreme pleasure calling these properties his subsidized housing.

He used all his money to buy houses and hotels on these properties. He then jacked up the rents so anyone landing on his property would lose a bundle. However, it always ended the same way, with Skippy going bankrupt.

Mastermind.  This was another game Skippy wasn’t particularly fond of due to the fact that it required strategic thinking. We had a kid on our block named Boris. Boris was extremely adept at breaking every code Skippy had. It infuriated Skippy at first, but by 5th grade, Boris and Skippy were best friends.

Sorry. Fugget about it. He was never sorry for anything he did, so playing a game such as Sorry was foreign to him.

Clue. We all realized early on, Skippy didn’t have one.

This informative book also looks at the early days of boy/girl parties. Needless to say, Skippy excelled at “Spin the Bottle.” The book is due out soon. Look for “Kick the