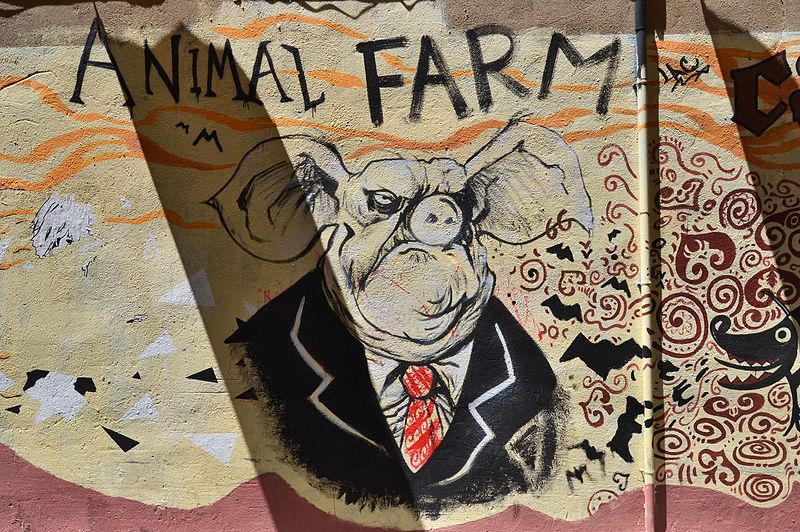 [The homeless old man, Rashad the Cackler is back with another rant. Enjoy as he spills his guts to passersby on a big city street corner.]

***
We’ve got these democratic, capitalistic societies we’re so proud of. That’s how we “progress,” right? By voting and making money and buying stuff we don’t need.

I’ve been trying to figure out, though, why politicians and pundits make a fetish out of the word “appropriate.” I saw it once on CNN: it was a typical American political negotiation. President Trump had dragged a Democratic senator’s wife into the Oval Office and ordered his henchmen to gang rape her right in front of the senator and his children. They went to town on her, because it was televised so they had to make it a spectacle. I saw a Taser and a cat o’ nine tails and a flaming trident. A donkey got in on the action, and in the end they cut her up into ribbons and vacuumed her remains off the carpet.

The press turned to the senator for comment and all he could say was, “Mr. President, that was inappropriate.”

Why are the world’s most powerful English speakers so averse to telling us what they really think? Does power make you hostile to the prospect of looking up some words in a thesaurus? Do you go to law or business school to learn to have contempt for genuine communication?

It’s like the time that politician went on a psychotic rampage in the streets, stabbing folks left and right, and when the press caught up with him, he confessed only that he’d “made a mistake.”

Did you think a Western politician is capable of evil? No, only of “inappropriate” conduct, meaning an action not currently sanctioned by some body of bureaucratic regulations. Our leaders can be guilty only of a “mistake,” of something like putting their left sock on their right foot or like dialing the wrong phone number. Their language has made evil impossible at the highest levels of our technocracies, because capitalism and democracy can do no wrong, by definition. Anyway, morality is religious or philosophical, so it’s for losers.

Even when speaking of the social progress we’re supposed to be capable of, politicians fall back on platitudes. When they have no idea how to solve a problem, they’ll say, “We’ve got to move forward.” That’s how you make things better when no one has a clue. You’ve just got to step forwards, never backwards. Because history lessons are anathema, I guess, for businessmen and politicians who need consumers and voters to be as dumb as possible, to enable the sociopathy that always rises to the top.

“Appropriate,” “mistake,” “forward”—these are magic words in so-called advanced industrial societies, for folks who are supposed to have outgrown the need for superstitions. We surrender to managerial platitudes and banalities. And those who care about English and authentic communication? They write books which hardly anyone reads anymore. Writers make a pittance, because Amazon siphons most of the profits. Is that the secret of capitalism? Not that in business you should profit by alienating your workers who don’t control the means of production, as Marx said. No, that’s only for old-school manufacturers. In postindustrial societies, where everyone’s a middleman, the trick is to convince society that your brand of uselessness is actually indispensible. If you’re one of a thousand administrators or vice presidents in your company, you’ve got to “lean in,” since only in a society where everyone’s mass-hallucinating and nothing truly important is happening would the mere effort of leaning in be a sure sign that you’re one of the good ones.

Progress is supposed to be about the maximization of pleasure or some such Enlightenment promise. But real progress is all about perfecting the use of power. The tyrants of old were more bloodthirsty than modern captains of industry, but that’s because we’ve made a science out of domination and exploitation. We don’t waste subordinate populations by slaughtering the males. We put them to work as wage slaves, conquering lesser societies with banking regulations and neoliberal tomfoolery. We don’t trivialize life by publicly torturing criminals, like they did in the medieval period; instead, we sustain the myth that life is precious so that consumers will become so full of themselves that they’ll buy all the garbage we’re selling.

We’ve taken to the next level the sociopathy that accompanies the concentration of power: witness the advent of the machine, the perfect vehicle for cruel logic. This is how we think of progress: poor countries are worse off because they can barely afford the necessities of life; rich countries can afford not just the necessities but the luxuries no one needs, until the rich people themselves can be dispensed with, and the whole postindustrial utopia runs on autopilot. By using our smart phones 24/7, we’re training the machines that will replace human workers and consumers; we’re ensuring our obsolescence, but that’s still progress because the machines will be the more perfect dominators—calculating, remorseless minds running superhuman bodies, ravaging the earth before heading to outer space.

For the moment, though, we settle for our imperfect dominators, for the psychopathic managers and politicians who resort to the inoffensive clichés of bureaucrat-speak—the linguistic equivalent of Muzak—to cover up the wonder of their amorality. Impoverished people of colour are typically only small-time, petty crooks and so they can’t avail themselves of the Trump Technique. You know, that’s the scam of getting away with all your crimes by having the gall to commit an infinite series of additional crimes, thus overwhelming decent people’s capacity to keep track of the scope of your transgressions. This is the technique that enables evil to disappear into the memory hole, as you defend one lie with another and then with another after that, and so on until your lies take on the appearance of a new order of truth and you gaslight your critics until they become, in effect, your adoring fans. The spectacle of your inhumanity becomes the supreme form of entertainment in a dying society.

Most thieves have only a limited capacity to steal. The poor steal to feed themselves, but the rich have been so corrupted by their wealth that they’ve evolved superhuman selfishness, avarice, and sadism that enable them not just to pick a pocket or two but to devour whole nations and generations, to gobble up the planet itself. Trump called this posthuman degree of villainy “the art of the deal.”

So say you were on trial for robbery, but you’re only a small-time crook who can’t even afford your average double-talking, amoral lawyer. Your hands are tied so you’re going to jail. But suppose instead that you’re rich, you’ve been raised on the heartless wisdom of social Darwinism, and so you have at your disposal the Trump Technique. In that case, you’re on trial for stealing hundreds of millions of dollars, for crushing the dreams of large populations. So even as you’re sitting beside your lawyer in court, you’ve somehow miraculously managed to commit another dozen felonies—right out in the open, under the nose of the judge and prosecutors—like Putin who had his political opponent assassinated just outside the Kremlin. You’ve lied so many times to everyone under the sun that no one has the stomach or the patience to refute them anymore, and so the judge throws out the charges because she admires the sheer spectacle you’re capable of, the new breed of entertainment value you bring to the table.

That’s the paradox of how Trump was able to stay afloat for decades despite his many wrongdoings: because his white-collar sociopathy makes him a posthuman criminal, a god of immorality not fit to be judged by mere mortals. Even his most fervent enemies are actually in thrall to him, since they love to hate him.

An English major went undercover to Harvard Business School and failed her exams because the prof said her writing was too expressive. Beside the failing grade, the teacher wrote, “How do you expect to lie to the sheeple, to avoid undo attention to your myriad misdeeds while in some high office, without the cover of understatement?” This, then, is why modern professionals in business and government prefer vapid pseudo-statements or tangled legalisms to honest communication, because there are no words to fathom the depth of their depravity.