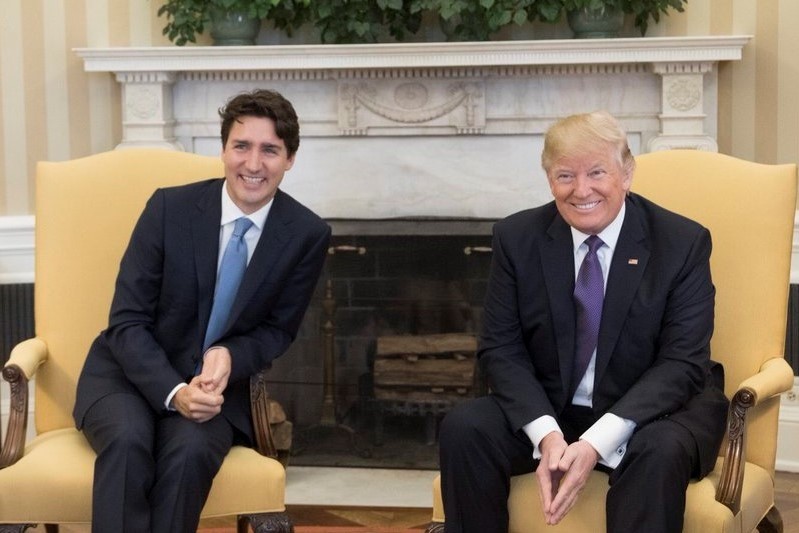 Dateline: CHARLEVOIX, QUEBEC—President Trump’s imposing of tariffs against America’s allies, Canada, Mexico, and the EU, has put these allies in the awkward position of having to remind Mr. Trump that the international system of economic regulations was put in place by America to establish that country as the global hegemon.

Mr. Trump declared at the 2018 G7 meeting in Quebec that this economic system is unfair because it allows America’s allies to have a trade deficit with the United States, which has sent many American manufacturing jobs overseas.

In response, according to aides who witnessed a conversation between some of the G7 leaders, Prime Minister Trudeau, President Macron, and Prime Minister Shinzo Abe explained to Mr. Trump that the US has lost many of these jobs because of the strength of the American dollar, which in turn is due to the fact that the dollar is the global reserve currency. The dollar is used all over the world, which increases that currency’s value, and this makes it more expensive to operate a business in the United States.

However, they went on to explain that the global role of the US dollar has been instrumental to US economic imperialism since the creation of the neoliberal world order, the IMF, the WTO, and the World Bank. Since the early 1970s, when President Nixon cancelled the convertibility of US dollars into gold, most oil could be purchased only in American dollars and so other countries have had to trade in dollars to be able to buy oil.

The global use of the dollar has enabled the US to create inflation, manipulate the exchange rates, and dominate the international monetary system. Although American workers have largely been losers under the rise of this system of global finance, American bankers, the American oil and gas sector, and American buyers of foreign resources can largely credit this system with their having “acquired wealth beyond the dreams of avarice,” as President Macron put it, adding that “this was by design.”

“You and your base of white cultists rail against what they call ‘globalists,’” said Mr. Macron to Mr.Trump, “but who is it that established the economic system of globalization? America. And which country has operated as the world’s only superpower for decades under this system? America.”

Mr. Trudeau added, “The lower middle-class whites who voted for you, Mr. Trump, think they’re entitled to benefit from globalization just because they have the same gender and skin collar as America’s billionaires. So they want to tear down the new world order, because of this order’s costs to American manufacturing. They don’t understand that social class means nothing to the new super-rich, that global finance is built on massive frauds perpetrated by psychopaths like you who care only about themselves.”

“Indeed,” chimed in Mr. Abe, “only those who are individually weak prefer to think of themselves as members of a group, so they can feel strong. This is the basis of their slave morality. American economic imperialism is designed to separate the wheat from the chaff, the richest ten percent from everyone else. White identity politics is for losers. The few winners created by this system don’t care about gender, skin colour, or sexual orientation. They care only about money.

“That’s why you, Mr. Trump, prefer to work with fellow billionaires or celebrities, and it’s why you dismiss the concerns of minorities. It’s not so much because you’re racist, but because you see the minorities as losers on account of their relative poverty. Psychopaths love to dominate, and in the new world order created by the United States, they do that best with money power.”

Mr. Trudeau demonstrated the power of the American dollar by placing an American five dollar bill on top of a Canadian one and chanting the magic words, “USA! USA! USA!” This naturally caused the Canadian bill to disappear.

“You see?” Mr. Trudeau said to Mr. Trump. “That’s the power of the American dollar, which is the source of America’s global hegemony. The trade deficit you speak of is nothing compared to the inequality that’s intrinsic to the global financial system: the US supplies the world with American dollars, while the other countries supply Americans with cheap things to buy with those dollars. The dirty manufacturing jobs go to poorer countries with weak currencies, while ten percent of Americans get to live like aristocrats. That’s the sociopathic tradeoff Americans have effectively voted for over the last half century.”

According to the eye witnesses, Mr. Trump only smiled and reminded the other leaders that he already knew all of that.

“You think I don’t know I’m a psychopath? Or that I don’t understand how fellow psychopaths operate?” said Mr. Trump. “I’m out to embarrass or to destroy the American-led global economic order because doing that benefits me personally, because it’s what Vladimir Putin wants and I’m in debt up to my ears to Russian oligarchs. If I don’t do what Russia demands, I’m toast. The Russian mob will kill me and my whole family. So my new allies will be the likes of Russia, China, and North Korea, not the more ‘civilized’ countries that have bowed to the United States, like Canada, France, and Japan.”

The world leaders proceeded to shake hands and smile creepily for the cameras.

By Office of the President of the United States (@WhiteHouse on Twitter) [Public domain], via Wikimedia Commons