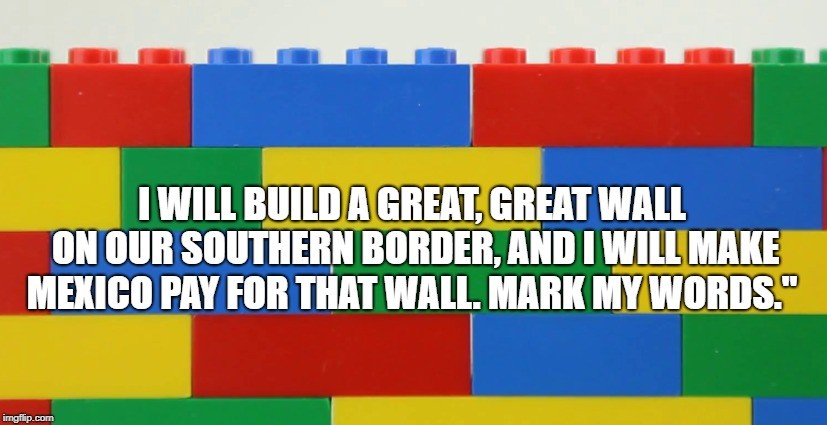 By Saturday, the day the U.S. government came to a grinding halt, Washington, D.C. long-timer and incoming Speaker of the House, Nancy Pelosi had “had enough of the wall already.”

We all know how Pelosi feels about “the” Wall. After meeting with Trump and Chuck Schumer over the impending government shut down, she made some kind of statement about Trump’s manhood or something, and then the gloves (or in Pelosi’s case, the earrings) were off, power sunglasses on.

So, while most Americans were trying to decide if they liked the sturdiness-looking wall that costs way more than the slatty-kinda wall, that costs less because it will take less steel to produce and we all know with the prices China is charging us for steel these days… Well, it was a tough decision. I mean, cost consciousness without a soul, or give Americans jobs by allowing them to manufacture steel here so that more steel can be made, not to mention the shipping costs we’d save. Do you know how much it costs to ship enough steel slatty-things from China to build “a wall” from California to Louisiana?

Way more than… oh hell, you get the picture! It is the government. They are expected to pay more for less. Speaking of which, did we ever get that $640 toilet seat cover issue fixed with the Pentagon?

Well, as we mentioned before, Pelosi was furious at the President for seemingly ruining her Christmas with her family. She was looking forward to a relaxing time especially with her grandchildren who call her Madam Speaker, in a familial sort of way.

So, the kids are gathered around the tree. It was always a family tradition to give each child a toy. One of the toys for one of the boys was a complete Lego kit titled “Build A Wall.”

“Wow!” exclaimed Nancy. “That’s it.” Before you could say “Mr. Gorbachev Tear Down That Wall!” Nancy Pelosi was on the phone with the folks at Legoland in Winter Garden, FL asking them how many Legos they had. When all was said and done, there was a new proposal on the table.

Pelosi flew back to Washington that evening, knowing she would find the President alone in the Presidential living area, drinking eggnog and contemplating his next tweet. She approached his room, knocked on his door. He opened it, but when he saw who was on the other side, he began to close it. And then, as if by magic, he noticed a bag of colors. Bright reds, blues, yellows, in tiny brick shapes and he realized, in that split second, the “wall” he wished for so badly was the wall his daddy kicked over a long, long Christmas ago. But how? How could Nancy have known that was what he wished for all his life? A wall made out of Legos.

And as he allowed Nancy in his living quarters, he realized, “Hey, I’m not such a bad guy. I am building a wall with a Democrat.”