Congratulations on an outstanding Winter Olympics in Sochi, Russia. And hey, that 18 year-old Mikaela Shiffrin was impressive on the giant slalom. Well done.

I just have one minor complaint to register: Why did you leave me off the team? I contacted you last summer, telling you I wanted to try out for the men’s freestyle aerials or half pipe or any alpine event you guys thought might attract babes.

But nobody ever replied to my text message – which by the way I typed in ALL CAPS to get your attention.

I have to say, as qualified as the team members you selected may have been, your decision to leave me off the roster is confounding. I demand an explanation. When I attempted to get on the team plane for Sochi, one of your staffers refused to let me board. I must say he was very discourteous, even after I flashed him 100 rubles to let me get past.

I demand to know why you refused to let me compete with the rest of the skiers. Was it because I’m 59 years old, and the next oldest competitor was 37? News flash: I checked, and age discrimination is totally against the law. Besides, I may be almost 60, but sometimes I use Grecian Formula (dark brown), making me look closer to 52.

Was it because you learned I was married to a Canadian and you questioned my loyalties? Or were you worried my wife would get into a cat fight with the American women’s hockey players? Or maybe you learned about my humor blog and worried I might write a sophomoric column which would create an international incident. I doubt I’d do that (although I confess I’ve never met a Russian figure skating judge I trusted).

Or was it the minor technicality that I failed to show up on the date of the U.S. Olympic trials last December in Park City? That’s extremely unfair…and, besides, it was totally my wife’s fault. That was the weekend she insisted I cut down a dead tree in our backyard. Took forever. Or perhaps that was the weekend I overslept. Either way, both are highly plausible excuses for why I was not able to make the trials. I texted, asking about a make-up trial date, but nobody responded to that text either. Do you guys even read your text messages?

Or perhaps you’re going to bring up the trivial fact that I’ve never actually competed in any of the alpine events. True, but I had trained rigorously for weeks in anticipation of the Olympics. As far back as last November, I implemented a rigorous workout regimen to prepare me for any number of alpine events. I don’t like to brag, but I mastered several events in the video game Mario and Sonic at the Olympics Winter Games – Sochi 2014. I totally rocked in the ski jump competition, even beating out the computer dude from Austria. 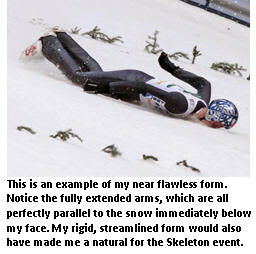 To get my body into shape, I began a high protein diet of unsalted peanuts. I eliminated cinnamon-sugar donuts from my diet for the past three months. Every day I drank two-liter bottles of Mountain Dew Voltage because in all of their ads they showed buff dudes performing awesomely rad stunts on mountain bikes and snowboards. And another thing: in preparation for the Winter Games, I completely overcame my fear of chair lifts (they’re so high off the ground) and made enormous strides towards overcoming my fear of snow.

I can’t believe you didn’t even give me a chance to prove myself. I was 100% mentally and 85% emotionally prepared for the intense pressure of these games. I may not have been in quite the shape of some of your younger team members, but I am completely over my injury from last June when I pulled my back out getting out of the recliner after watching a ten-hour Duck Dynasty marathon.

Sure, it’s possible I might not have been the fastest member of the squad. But whatever I may have lacked in speed, endurance, strength, flexibility, agility, sense of timing, self-discipline, work ethic, raw talent and peripheral vision, I more than made up for in heart. And isn’t heart what really matters in the end? For without a heart, all of us would be dead. There wouldn’t even be an Olympics. Besides, my cardiologist cleared me for brisk walking, and my cholesterol is down to 234.

I’m not saying I would have won the gold. I could have had an off day and slipped to silver or bronze. Heck, I might not even have medaled at all. It’s possible I might have stayed up all night playing Mario and Sonic at the Sochi Winter Games and slept right through my start time. I do that sometimes. But we’ll never know for sure because you guys didn’t even give me a chance. Thanks, USOC.

You can’t possibly imagine the heartbreak I’ve suffered as a result of your unfair decision to shut me out. Does your child have hopes and dreams? If they ever want to try out for a girls’ rec soccer team, they’d better hope I’m not the coach. I would hate if their application accidentally got shredded – just like my Olympic dreams. 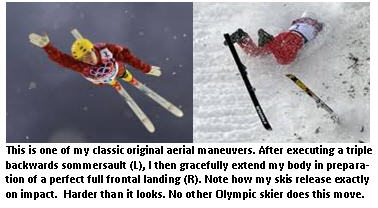 But I partly blame myself. Perhaps I was kidding myself with my dreams of Olympic glory as a freestyle aerial skier. The more I think about it, I was always more of a luge man anyway.

Still, I’m no quitter. That’s why I’ll soon be hard at work preparing for the U.S. trials for the next Olympic Summer Games in Rio de Janeiro. I can’t decide which event to try out for – pole vault or synchronized swimming. I really excel at both video game events.

I’d better wolf down that sleeve of Double Stuf Oreos right now because starting tomorrow, they’ll be almost totally off my diet plan. I want to make sure I do everything I can to ensure I won’t be left off the plane again as it flies to Rio for the Summer Games in 2017.