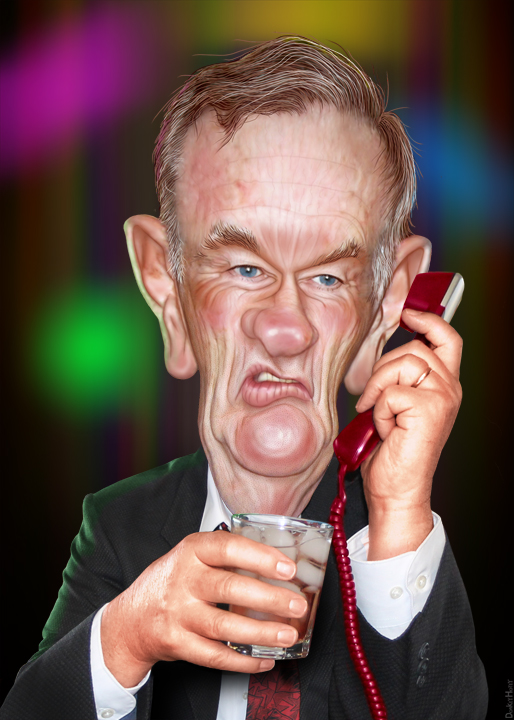 Democratic politician Barney Frank may be retired now, but he’s still enjoying (as much as ever!) the witty repartee and genial jousting in the Fox News studio.
Yup! A Bill O’Reilly clip has just gone viral, where the Fox commentator reduces Barney to abject bemusement regarding Frank’s far-left socialist-welfarist-eco-freakian “Big Lie” about the sky being blue.In case you weren’t aware, this not the first time Bill and Barney have crossed swords…
But it’s still rather reminiscent of one very famous earlier clash of these Red and Blue Titans. Here’s our transcript:

BILL: I just played you that clip, Barney! You said the sky was blue! Right?
BARNEY: Well, yeah…
BILL: So God is a Democrat? That’s what you’re trying to tell us, Barney? You’ve got God on your side, huh? Blue is a pretty heavenly color then? The Almighty supports your idiotic, backward, social-interventionist, coercive agenda, up there on his cloud somewhere?
You tell me, just what you meant! Just tell us Barney! We’re all itching to hear! Don’t mess up this time!
BARNEY: Well, yeah, the sky’s blue, but I meant in a kind of a, you know, in an optical sense…
BILL: No, uh-uh, don’t you try and turn this around! No backpedaling! Don’t you dare try to flip-flop, it won’t wash with me, Barney Frank! You’re not in the Senate now!
BARNEY: Listen, Bill…
BILL: Oh, no! No! No! No! You said the sky was blue. No! No! Don’t deny it, Barney!
BARNEY: I’m real sorry Bill, I just…
BILL: Shut up, Barney Frank. This is MY show, and you said the sky is blue! It’s on video! You want me to play it again?
BARNEY: Listen Bill, I did say the sky was blue, but…
BILL: No buts, Barney! Don’t try and fool me!
BARNEY: But Bill…
BILL: No! Don’t even think about it! Did you say the sky was blue? Give me a straight answer, Barney!
BARNEY: In a way, yeah, I mean…
BILL: O! No! No! No! No! Don’t interrupt! Show some goddamn civility, you little jerk! No, no, NO! Shut up and listen!
Right! So what did you say about the sky, Barney? Huh? Huh? Answer me, dammit! Seriously… man! Urghhh!
BILL: Please listen, Bill…
BARNEY: No! YOU listen to ME! Seriously! Listen to me, and quit throwing dust in our faces! Seriously!
BILL: But I’ve been trying to tell you this whole time, Bill, but you just…
BARNEY: Tell me what, Barney! Tell me WHAT? Spit it out… spit it the hell OUT, Barney!
BILL: Please… please let me go home, Bill.
BARNEY: Uh-uh! Uh-uh! NO! You’re not going anywhere, Barney, til you tell me the truth!
BILL: But you’re IMPOSSIBLE, Bill! You are just impossible to engage with!
BARNEY: No! It’s impossible to get a straight answer from YOU, Barney Frank!

For some mysterious reason, I haven’t got the end of the transcript, but I guess it didn’t end too pretty.
Still, Fox News have just released a statement making yet another achingly candid and utterly convincing apology:
“We appreciate that some American politicians do hold a sincere and honest conviction that the sky is blue. It would perhaps be best if we all agree that as with other intricate issues in American politics like Darwinianitism (sic), junk vaccine “science,” and whether we should look after our own backyard first, the jury is still out.”
Funny… that’s precisely what I was thinking too. These guys shouldn’t just give in like that. Typical Democrat fanatics. Next time they’ll be making it illegal to oppose their insidious ideology of beer-cooling-denialism…
Must be the insidious far-left British influence. All REAL Americans love a frosty beer, not a warm-ass English one.
Yet again, King George lives! How are we gonna stop this one?!

By DonkeyHotey (Bill O’Reilly – Caricature) [CC BY 2.0], via Wikimedia Commons

Originally published at The Spoof.