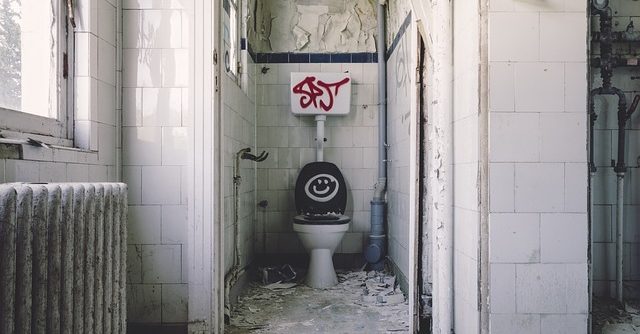 Birmingham’s most famous son, Ozzy Osbourne of Black Sabbath, has recently got caught with his pants down in a Birmingham public toilet.

Fans of George Michael will be relieved, however, to learn that all is not what it seems!

“Urrgggghhh, it’s like this, mate!” Ozzy tells me. “Basically, our Shaz were down in the Waitrose buying some stupid fucking SHIT we didn’t need for the house, an’ I ‘ad to go and empty meself before me next gig. The main shitter near me were closed, so I ‘ad to get the one just outside the Bron-y-Awr Club. I pulls my trousers down, do my bloody business, and then I ‘ave to go back an’ meet Shaz.

“Get up, rattle the lock, the bloody door won’t open! ‘SHAAAREEEEEEUUUUUUUUUUN!’ I shouts to the lass. FUCKING DOOR AIN’T WOOOOORKING, LOVE!

“Oh, would you stop bothering me, Ozzie, you silly bugger!” says our Shaz on the phone. “Calm down and call the toilet manufacturer.”

“So I calls the lads, they are called ‘Midland Toilet Hire, Birmingham,’ and they come and send a lad to let me out. They were all asking me for FUCKING AUTOGRAPHS later. ‘Fuck off!’ I tells them. ‘Ozzy don’t do fuckin’ autographs! WHERE ARE YOU SHAREEEEUUUUUUHHHHHHHN!’”

Still, there is an upside for the UK’s best beloved metal legend.

“The poor lad got a proper scare. I can’t take you anywhere, love, can I?” laughs Sharon. “Still, at least you’ve finally had your first public toilet incident. You know you’ve finally made it when you’re all over the papers cos of your silly antics in the local shitter. I suppose that’s another one for your bucket list, Oz!”

“Mmmm! Interviews are so FUCKING BORING, Shaz! Can we get rid of this lad now?”

Well, I have to say my first interview with our Ozzy was a resounding success.

Even if I was shitting my pickles before meeting him!