How’s that for a clickbait headline? It’s wholly untrue, but that doesn’t stop the cash-hoarders from taking any opportunity to espouse their contra-factual nonsense.

Estate taxes serve several purposes, but I don’t want to spoil the surprise upfront, so if you promise to read down further, I’ll give you all the juicy facts you will have so richly earned.

Melissa Rivers on Her Own

Before her brilliant mother’s departure from this world, Melissa Rivers had an estimated net worth of $12 million. That’s nothing to scoff at.

It put her roundly and squarely in the top 1%, as only $8.4 million is needed for that.

At historic, long-term stock market returns, she could have retired yesterday with $840,000 in residual income. That’s like having a job that pays $403 per hour. Not too shabby. But she’s worked hard for that money, and she deserves it.

But since those would be dividends and capital gains, they’d be taxed much lower than if she was actually “working” for the money, so add another 10% on top of it. Melissa Rivers’ income would be about $440 per hour if she never worked another minute in her life.

But there’s a looming inheritance, and once which conservatives are wrongly trying to demonize and villify as a money grab from the big, bad government. They are wrong to pick this instance to make their case, and I’ll show you why.

Death tax? Get real. “Death Tax” is effortless to avoid. It’s the most moral tax there is. All you have to do to avoid it is not die, or, heaven forbid, spend it in your lifetime. Instead of spending it, Joan chose to hoard it.

Why an 81 year old would think she needs $150 million in assets is beyond me, but that was her choice.

Now keep in mind that estate tax only applies to transferable assets with a total value over $5.34 million (as of 2014, though unlike minimum wage, this is geared to inflation, so it climbs every year.) Also, small family businesses are exempt.

Dated a girl whose wealthy grandmother died and she explained how wrong I was. Their company literally had to take out a mortgage just to pay the estate tax. Well, it wasn’t a small business, but a corporation. They had reaped the tax benefits in their lifetimes, rather than pass them forward to the (I assure,) ungrateful heirs.

And remember, these are marginal rates. So if grandpa leaves you a $6 million estate, you’re only going to pay $264k in taxes, an effective rate of 4.4%. For pennies from heaven, that’s a pretty solid deal.

According to The Daily Mail, Melissa will get $110,000,000 in her inheritance, including $75 million in cash and another $35 million in equity in a posh, highrise NYC apartment.

The federal estate tax means the US Government will claim $41.864 million from this inheritance. Shameful, right? How dare they!?! Well, it’s the law and it exists for many, many reasons.

Despite the high tax rates and overall tax climate in New York, Joan Rivers chose to make that her home. Perhaps because it was where she was able to find the work that allowed her to amass such fortune while still living a wonderful and extravagent lifestyle.

Still, it seems her estate may be subject to New York’s rather high estate tax of 16%. According to Farina Law, that could be as high as $17.44 million. That could have been avoided by living in a state like, say, Wyoming, where there is no state level estate tax. The only downside would be that you’d be stuck in fucking Wyoming.

After the federal exemption, and the state-level estate tax, Melissa’s take-home when the dust settles will still be almost $51 million. Considering the historical average return is 7% for long-term investments, that means she would have over $3.5 million per year in interest without ever touching the principle.

Are we really shedding tears for her? Would her life be appreciably different if her annual interest (before actually working) income was higher than $1,706 per hour? Between her self-earned portfolio and her inheritance, her never-work-again income would be the equivalent of $2,109 per hour (plus 10%, since she would have to pay those pesky “wage taxes” to boot.”

Four straight weeks of 40-hour minimum wage work pays $1,160, assuming the worker can actually get 40 hours, never gets sick, and never takes a vacation. That means Melissa would make in 33-minutes of not working what a minimum wage earner would make in a whole month.

Melissa Rivers is strong, successful and proud of the name she’s earned for herself. She doesn’t need our tears.

Here’s how much she doesn’t need our tears 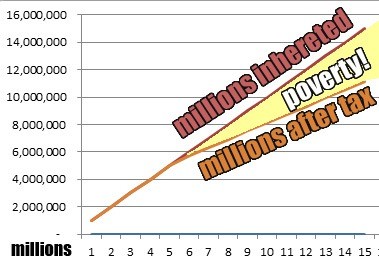 See how modestly the graph starts shifting after the $6 million mark?

How much Estate Tax did Joan Leave Behind?

$3.45 trillion annual federal budget. Federal estate tax of $41.864 million equals her contribution funding the federal government for 6ish minutes. Not bad, Joan, but we can break it down to do you better justice.

For the 2013 budget, Joan Rivers estate tax will pay:

$8.1 million to the department of defense. Money well spent, I’m sure.

$10.7 million into Social Security, which works out to 17-cents for each of the 64 million recipients. Greedy baby boomers, having the indecency to claim what they paid into for decades, amirite?

$11.4 million goes into Medicare/Medicaid, with each recipient getting about 16-cents for the single year.

$215,000 to NASA, which would be great if the engineers’ grandfathers hadn’t found Uranus decades ago. I kid with love. But seriously, this would be a mere one to four salaries, depending upon whom we’re talking about.

Brian first began peddling his humorous wares with a series of Xerox printed books in fifth grade. Since then he's published over two thousand satire and humor articles, as well as eight stage plays, a 13-episode cable sitcom and three (terrible) screenplays. He is a freelance writer by trade and an expert in the field of viral entertainment marketing. He is the author of many of the biggest hoaxes of recent years, a shameful accomplishment in which he takes exceptional pride.