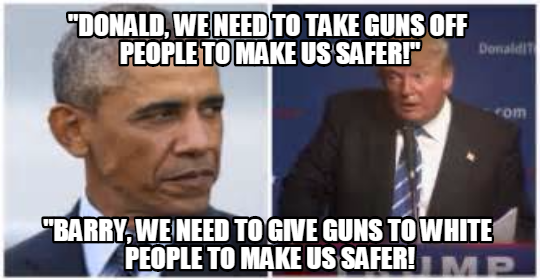 Former President Barack Obama has recently ridden on the coat tails of the Sanders and Ron Paul Revolutions, and advocated a ‘Democratic Coup’ in the United States.

Now let me say this.

You can kind of see where they’re coming from!

There is no need to be uncivil.

My friends, the Republicans, are people with whom we have some honest disagreements.

That’s what America is all about.

That’s why my good friend Saul Alinsky has such a special place in my memory; he definitely pushed the envelope, and broke the mold.

Now, I don’t see any reason to be hostile or impolite towards President Donald J. Trump. He has his ideas, and I have mine.

In my opinion, the only way to peacefully resolve our differences, in the amicable spirit of American democratic charity, is to make a Democratic coup and, if you want to put it this way, a ‘liberal Revolution.’

I know, that some of the media, some of the Fox News media and other folks out there, are going to try and put a spin on this, and say I was advocating some kind of violent actions, of some kind or another.

Now let me say this. I have always, always, opposed political violence.

Now I am not going to boast! Heh, heh, heh. But when it comes to me versus Donald J. Trump, I think it’s fairly obvious who has the better credentials for peaceful, non-violent resistance against innocent Syrian schoolkids… uh, nursing Iraqi mothers… uh, never mind the semantics!

So, I hope you will remember these words.

America is counting on you!

Don’t fail me in your hour of direst need.