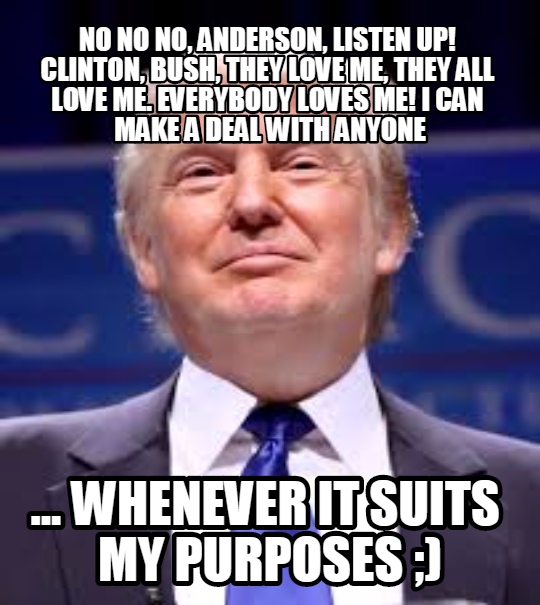 As exclusively revealed on Glossy News over the course of the past 48 hours.

I just find this SO offensive! This guy, he just seems like some kind of dishonest authoritarian who wants to trample over everyone else purely in order to get the ticket, so he can keep a tight grip on power when he gets elected!

Hm! Purely in the name of his own petty, selfish personal advancement, no less!

I mean, the thing about this Trump… sure, he seems fairly shrewd and competent in some ways. No frickin’ shit! But nevertheless, he doesn’t seem to have the kind of compassion, generosity of spirit and tolerance of diverse points of view that have made our dynasties so beloved around the world…

Or better still, around all 59 states of our nation?

But seriously, I mean, what an awful, opportunistic fanatic this guy is! It just seems like, y’know, anyone who disagrees with him isn’t wrong, or even ignorant. Nope! They are just smeared as being PURE EVIL!

Well, that’s just so DAMN undemocratic, isn’t it! He just won’t entertain the possibility that other people’s opinions may be just as good as his own! He never apologizes, he sneers at people who hold contrary views to his own, and his only truth is:

‘I am the people, and wisdom abides in the heart of me alone!’

Uh… sorry. No, we mean, ‘we simply CANNOT empathize with such a selfish, self-indulgent and cynical attitude!’

Because, you know, this is simply impossible to square with our age-old visions of what presidential elections in the USA are all about.

… PSST! By the way, I don’t mean this in a kind of, y’know, opportunistic way…

But if you want to know the names of some candidates who are LITERALLY NOTHING AT ALL like this, then just you try calling up our premium-rate number and getting a bit of perspective, so we can make America truly great again!

So, if you don’t like this guy, there are one or two people out there who have a much better idea about how to govern my country than anything that you or him could ever come up with…

Hm! Sounds like these guys just ‘misspoke,’ as per usual.

Or let me put it this way, just to balance things out…

Any chance they are actually looking for ‘free stuff’ from the great American public?

Nah! Well, you know what? I don’t think the voters will be fooled by all this pretentious, hypocritical crap! I mean, if you’re stupid enough to vote for either Jeb Bush or Hillary Clinton, there must be something seriously wrong with your judgment. Hey, I swear, some of of these voters just have no common sense whatsoever!