Goldman Sachs, the Wall Street investment firm that profited heavily from the world-wide collapse in subprime mortgage bonds, has announced that it will participate in a bold new experiment to apply the principles of greed and the profit motive to the problem of preventing young ex-cons from returning to prison in New York City.

“New York City is continually seeking innovative new ways to tackle the most entrenched problems, and helping young people who land in jail stay out of trouble when they return home is one of the most difficult — and important — challenges we face,” said Mayor Michael Bloomberg.

Under the agreement with the city, Goldman Sachs invests $9.6 million of its money in solutions of its own design, and bets that its solutions to the problem of recidivism will work. If they are successful, the city rewards them with a profit of as much as 25% on their investment, and if not they stand to lose up to the same amount.

The new solutions are nothing if not innovative. One plan under consideration is to apply U.S. constitutional guarantees against unreasonable search and seizure to persons on parole. These Fourth Amendment rights have never been tried before, but Goldman Sachs has determined that suspension of those rights enables police to stop parolees without cause and accuse them of crimes that often result in conviction and re-incarceration. This is because judges and juries nearly always take the word of police over that of persons who have previously been in jail.

Goldman Sachs also intends to provide incentives for the NYC police force to avoid stopping and arresting ex-cons that are in the program, while increasing the number of persons being arrested for the first time. This will improve the statistical ratio in a way that is favorable to Goldman Sachs, which increases the return on their investment, under the agreed-upon greed formula.

In addition, Goldman Sachs will offer similar incentives to as many parolees as possible to move to other cities, states and countries. Even if they commit crimes in these other locations, the statistics will not register in New York City, which enables Goldman Sachs to still make a bundle.

Finally, Goldman Sachs will make available to young convicts its expertise and resources in committing crimes while avoiding jail. The trainees will learn the basics of white-collar crime, fraud, and political influence, as well as the techniques of how to get the public to cover losses due to gambling, poor judgment and unsuccessful bilking schemes.

The company says it will use its own connections to keep some of the trainees out of jail, but not if the cost of doing so exceeds the potential profit on their investment, which is against the principles of the company.

Nevertheless, Goldman Sachs is optimistic. According to a spokesperson,

“We expect that some of the brightest graduates of the program might even become Goldman Sachs executives, and we are open to the possibility that the learning process might be in both directions.” 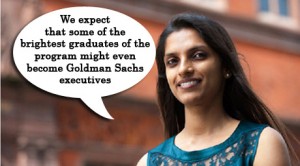 Barb Weir is the pseudonym of a writer and social justice advocate in the San Francisco Bay Area.

2 thoughts on “Goldman Sachs to Make Money from Young Convicts”