Amid talk of the different factors that led the Red Sox to their fourth World Series in 15 years, one factor has gone on unnoticed.

Sure, they had great (and high-priced) talent and great chemistry. Some claimed having a new manager in Alex Cora changed the culture and helped them keep their competitive edge over a long season (based on his experience as bench coach for last year‘s champs, the Houston Astros). While others pointed that a number of these players had strong motivation for redemption. But so did the Los Angeles Dodgers, who made it to the World Series last year and lost – and did not want to come in second again.

It’s a Red Sox baseball shirt I bought on a family trip to Cooperstown in January 2014, after the Sox last won the World Series. I didn’t find it at the Hall of Fame but at a store within walking distance. Gray with blue three-quarters sleeves, the cotton shirt I wear as a night shirt features a big Boston Red Sox logo in front and a stylized B on the left arm.

That may not seem like much but there’s something magic about this shirt.

For example, during Game 2, sometime after the Dodgers took a 2-1 lead in the top of the 4th inning, I was watching at home and changed clothes. After I put on the shirt, in the bottom of the 5th, the Sox scored three runs and won the game, 4-2.

Although the Red Sox trailed the Dodgers until I put on that shirt, I dismissed it as a coincidence. I mean, the team had won 108 regular-season games, and defeated the Yankees and Astros in the playoffs, and many of those nights I did not wear the shirt. That’s why, when we traveled that weekend to celebrate my wife’s aunt’s 99th birthday in Florida, I didn’t pack the shirt – even though I knew the Sox would play games 3 and 4 before I’d return home and could wear it again.

What happened with Game 3? The Sox lost in a heartbreaking 18 innings, 3-2. If they had just a smidge more good luck, they might have won that game.

Through the 5th inning of Saturday’s Game 4, I was concerned. The game was tied 0-0 until the Dodgers scored four runs in the 6th. I wondered: without my shirt, could the Sox come back from the potentially devastating loss? To their credit, the Sox scored nine runs after the 7th, including five in the top of the 9th for an unbelievable come-from-behind victory, 9-6. But that didn’t disproof the power of the shirt. After all, they’re a great team. They don’t need luck to win every game.

On Sunday’s Game 5, the Sox were up 2-1 by the end of the 1st but there was no guarantee that would be enough. Finally back home in Boston, by the 5th inning, I decided to test my theory, and put on my Red Sox shirt. The result? The Sox scored a run in the 6th, 7th and 8th – enough to win the game 5-1.

Here’s the proof: The Red Sox finished 2-0, winning 100 percent of games when I wore my special Red Sox baseball shirt but were 2-1, winning just 66.67 percent, when I didn’t. That big statistical difference is fairly conclusive.

True, I wasn’t in the stands for any of those games (which one friend suggested is the real reason the Sox won); instead, I watched from home or a guest room (where changing into pajamas wasn’t as weird as if I were watching from anywhere else). Real fans have long recognized that location isn’t really a critical factor. Whether watching from the stands or in a bar or at home in pajamas (these were late games, especially Game 3), our cheers always make a difference.

The bad news: I really want to wash it but you have to respect the streak, and aren’t supposed to make changes, so I don’t know what to do. I know I need to protect the shirt for next season. I’m storing it in a secured, undisclosed location, and am now suspicious of anyone lurking around my neighborhood wearing either Dodger blue or Yankee pinstripes.

By the way, I’m not saying the Red Sox won simply because I wore my special shirt. We couldn’t have done it without a lot of talented players stepping up and some excellent managing during the World Series.

But I am proud that when the pressure was on, my shirt didn’t fold. 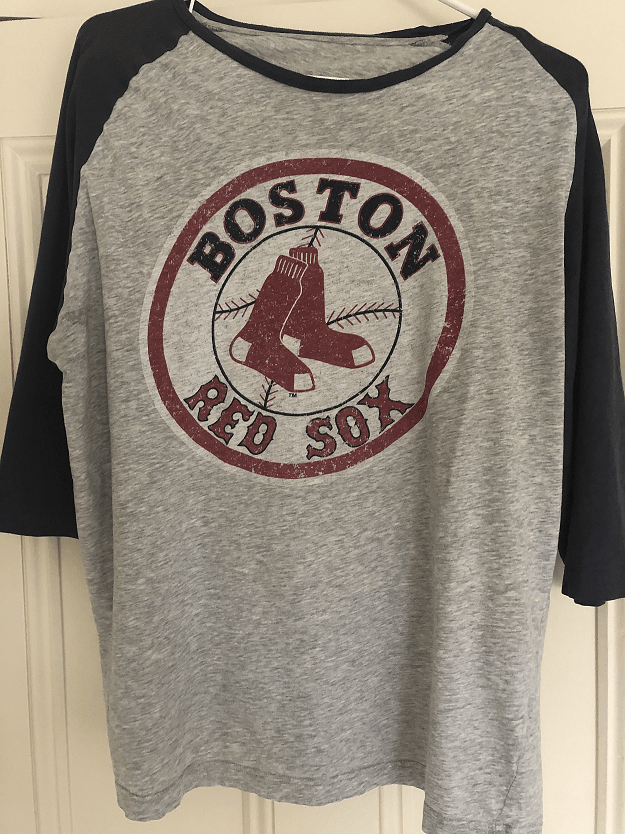 Note: This is not my actual lucky Red Sox baseball shirt. The actual one, kept under secure conditions, has some key differences, including it was made with more luck than this one.

A freelance humorist, my work appears on McSweeney's Internet Tendency, Barnes and Noble's "Grin & Tonic" and dozens of other online and print publications. Check out my articles at normanbirnbach.com.