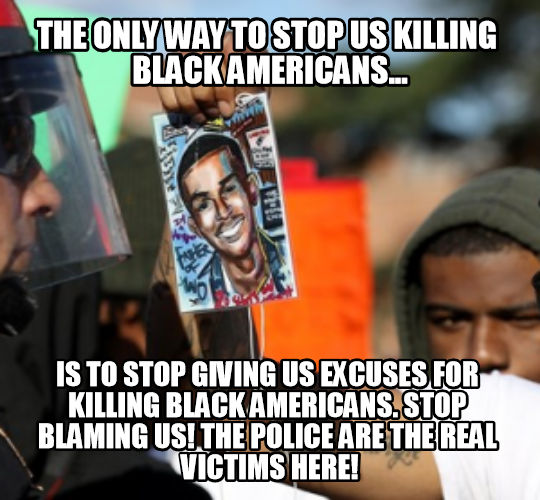 Most of you will have seen the recent scandal where the police shot an unarmed black man multiple times in the back while he was standing in his own grandmother’s back yard, holding a cell phone that officers mistook for a gun. But you might not have heard the latest twist in this sick and macabre tale: the Sacramento Police Department has inaugurated a ground-breaking new law.

In a move of unlimited compassion for their fellow man, and out of a civic sense of duty, and not to mention to avoid further condemnation by the rest of the United States, they have pushed a law forbidding Black Americans from carrying cell phones at night.

In order to prevent such tragedies from happening in the future we are passing a law forbidding African Americans from carrying a cell phone at night. That will help in some way from preventing our officers of the law from shooting them down because of mistaking the phones for weapons such as AR-15s or machine guns. And, in order to even more reinforce this new covenant, we are also going to ask our black citizens not to be out at night at all. Now, of course, this might seem like a form of prejudice, but that is not true at all. It is merely a simple statement of fact. All, let me repeat that all, of our officers find it difficult to see black people at night thus making it harder to tell what they are up to and, furthermore, harder to properly shoot them.

After some further deliberation, the Sacramento Police Department also decided to also make it a law for African Americans not to be in their Grandmother’s backyard at night, as well just to make sure they had themselves covered in the event of another such nation-wide incident embarrassing their department.

Meanwhile, a law to make the policemen involved pay for the young man’s funeral and to pay some form of compensation to his family was immediately overturned as being ‘socialist’ and against standard police protocol.

Possible Excuses For A Policeman To Shoot A Black Kid In The Back 16 Times.

Police Excuses As To Why They Threw A Fifteen Year Old Black, Bikini Clad, Barefoot Girl To The Ground And Pinned Her Down In McKinney, Texas.

Yes, Virginia, It is possible to store 100% of police body cameras