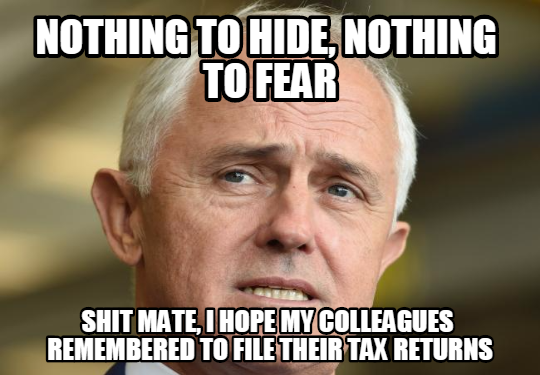 Straight-talking Australians tend not to hold it in; they’d rather , er, spew it all out, and say that Malcolm Turnbull is a bit of a dick.

However, the rampant frustration and anxiety of the Australian political scene is reaching its climax, with an utterly extraordinary explosion of salty vitriol from dickhead-in-chief Malcolm Turnbull.

Foaming at the mouth, and spitting and spraying his poisonous garbage over all and sundry, Malcolm managed to pant out:

For too long, the Australian people have been instructing their government to stay away from backdoor encryption.

The government need to know what is in your backdoor.

So don’t you be expecting the people that really matter just to sit on their arses, and watch you folks just gallivanting around doing whatever the hell tickles your pickles.

So, let my brothers give it to ya clean ‘n’ sweet! If you have a backdoor, then you can be sure, one way or another, a patriotic and freedom-loving government will easily find a way inside it.

So, you can either surrender yer goodies with an open hand…

Or, you’re going to have to learn the hard way that when the Australian government play hardball, there’s just no way you’re going to run away from the power of the noble statesmen!

Don’t ever think about trying anything stupid like having a nice shred somewhere else.

Because for what it’s worth, our boys here love a damn good shred, and they’re more than capable of handling this stuff themselves!

amateur privacy extraordinarios Julian Assange and Rolf Harris have already dropped some dark hints about the allegedly ‘creepy and rapey’ character of this flamboyant bravura speech.

Don’t blame me, mate! I only read the crap my stupid interns write for me.

If I’d written this stupid speech myself, it would have been much better!

I guarantee it! Nobody does good speeches like the Turnbull.

Next time, I’m gonna write the biggest speech in the world!

Trust me, you’re gonna love it!

You can trust me on this one.